Once again, a brief interlude from My Not So Humble Wife.

After weeks of foreboding speculation about the impending fiscal cliff, the New Year came and went with no evidence of the sky actually falling. This might be due to the fact that our decisive and ever diligent Congress and Senate solved the fiscal crisis on New Year’s Eve by kicking the deadline out until March. A brilliant piece of legislative procrastination.

Now we’re in for more endless argument over what combination of  1) spending cuts and 2) tax increases should be enacted to reduce our roughly $16 trillion federal deficit. But there is a third option that I’ve never heard mentioned. Do you know how the government handles budgets? If not, this will astound you.

Throughout all government agencies, the military, and governmental run programs each department is generally given an annual budget amount to play with for the year. Here’s the problem: at the end of the year if the department didn’t spend all their money, they won’t be able to get a budget increase in the next fiscal year.

Let me say that again,  if they don’t spend all the money they asked for last year they won’t get more money in their budget for the next year.

This means there is no incentive whatsoever for any government funded agency to save money. In fact, starting around October, government agencies that have a budget surplus rush out to ditch any remaining cash. Under our current budgeting system, they pretty much have to or they risk being underfunded in the next fiscal year.  Excess spending of this nature may be relatively small potatoes for any one agency or department but all together it’s a significant amount.

What to Do With Extra Budget Money at the End of the Fiscal Year? 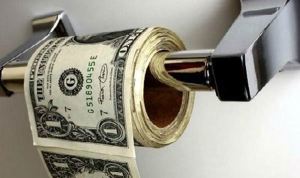 I’ll admit with no hesitation that I’m not an expert on finance or government spending. However, I think that a different budget process that incentivized saving over spending might reasonably be developed. One idea would be to place more emphasis on accurate estimations. Suppose there are two possible budget proposal review processes, one for those groups whose spent close to what they were budgeted for the prior year and one for those groups whose budget wasn’t accurate for actual spending.

For example, the newly proposed budget for groups whose spending was within say, 5%  of their budget from the prior year could be on a fast-tracked approval process. Those groups whose spending differed (either over or under) by more than 5% would face a review that required additional justification. To avoid having departments just spend money until they were within the 5% range, you could allow money to be designated as savings without any penalty and which would then just be applied to the next year’s budget. This would provide incentive for departments not to overspend and would remove the current undesirable incentive of spending additional funds wastefully.

This one example could make the difference between funding or not funding a critical program and there are probably other systemic issues that could be addressed as well. So I hope that as we continue to debate how to balance the national checkbook we look for savings within the systems as well as at cut and tax remedies.

What's Your Not So Humble Opinion? Cancel reply